Second China International Import Expo with benefits for all parties

Officials and business leaders said that the second China International Import Expo will not only provide global companies with access to the Chinese market, but also provide a platform for economies to participate more in free trade and global governance.

Vice Minister of Commerce Wang Bingnan said that the scale of this year’s exhibition will be larger than that of last year’s opening and the quality will be higher. It will inject new vitality and momentum into China’s further reform and opening up.

Wei Fair said that as a large-scale global platform, the trade show will demonstrate China’s determination to deepen its economic globalization, noting that the first and second editions are a decline in foreign direct investment and trade flows affected by protectionism Under pressure background. Jianguo, Vice Chairman of Beijing China International Economic Exchange Center.

According to the China International Import Expo Bureau, the organizer of CIIE, this year’s first exhibitors have signed up for this event, and more than 3,000 companies from more than 150 countries and regions have confirmed their participation at the registration deadline. can. The second CIIE will be held in Shanghai from November 5th to 10th. 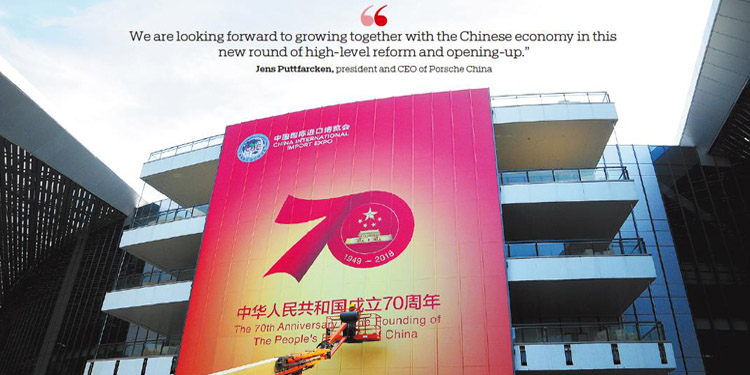 The organizer also announced in early September that more than 250 Fortune 500 companies will participate in the second CIIE, and the exhibition area has been expanded to 300,000 square meters.

Tang Wenhong, director of the Foreign Investment Management Department of the Ministry of Commerce, emphasized that the expansion of the trade fair this year and the increased enthusiasm for exhibitions show that the Chinese market is an important part of international trade. The global economy and the country’s purchasing power are becoming increasingly important to global businesses.

Professor Wang Jian of the University of International Business and Economics said that the second CIIE will become a bridge connecting the huge potential of multinational companies and the Chinese market, and further encourage foreign direct investment (FDI). The latest statistics from the Ministry of Commerce show that China remains an attractive destination for such investments-in the first eight months of this year, foreign direct investment increased by 6.9% year-on-year to RMB 604 billion ($ 84.88 billion).

Chen Dongqi, an economist at the Institute of Macroeconomic Research of the National Development and Reform Commission, pointed out that CIIE will also help eliminate stereotypes that China will continue to be an export-driven economy.

“Instead, CIIE will promote free trade, global cooperation and multilateralism, and oppose unilateral action,” he said.

“Many foreign companies have expressed the hope that they will have better visibility in China and find more partners to help them distribute products and services in high-end cities, low-end cities, county markets and markets. With the” Belt and Road ” The initiative is relevant. “Feng Yaoxiang, director of the Investment Promotion Department of the China Council for the Promotion of International Trade, added.

Porsche China is one of the foreign companies that appreciates CIIE, which clearly shows China’s determination to support trade liberalization and economic globalization.

The German automaker said it will bring its first electric sports car, the Taycan, and other hybrid electric vehicles at this year’s expo. Porsche China President and CEO Jens Puttfarcken said that in the first half of 2019, Porsche delivered 42,608 vehicles in China, an increase of 28% year-on-year, ahead of other global markets.

Cargill China is another company with the same view.

Cargill China Vice President Owen Ma said that following the successful outing last year, the American agricultural group will double its booth area to 200 square meters this year. In addition, the company’s global CEO will participate in this year’s event to interact with stakeholders.

“The second CIIE is a highly influential event, providing a great opportunity for Cargill to connect with key stakeholders and demonstrate our commitment to China,” said Ma Yun. He noted that the event would be Cargill’s Provide critical support for future business growth in China.