Three years ago, when I was traveling to Spain, every morning, buffets at different hotels in different cities provided a variety of cured hams for breakfast. I like the salty taste of cured ham, and some of my friends say they are not used to eating it every day, especially at breakfast.

At that time, cured ham was a common food in Spain, but an exotic niche product in China. I can’t imagine it will continue to be popular and widely recognized among Chinese meat lovers.

Well, according to the Chinese zodiac, 2019 is the year of the pig. Eating more pork has become a habit in China and has become the main dietary habit of the Chinese. 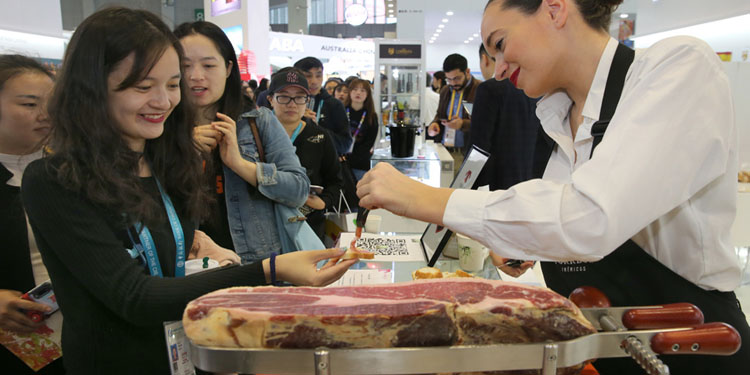 Pork production has peaked in Spain this year, partly due to the large demand in the Chinese market. According to the Spanish newspaper El Confidencial, production has grown at a rate of 20% per year for the past five years.

By the end of last year, Spanish cured ham producers had received a green signal to export more types of pork, such as boned ham, to China, further increasing exports to China.

Pork ranks first in Spain’s agricultural exports to China. According to the Ministry of Commerce, Spain has also become one of China’s largest sources of imported pork.

Although ham is relatively new in China, ham is expensive. For example, a pack of 70 grams of cured ham buns is priced at 389 yuan ($ 55.6) on Tmall Mall, which is the main e-commerce platform of Alibaba Group. However, it is very popular among Chinese consumers for its elegant taste and willingness to try different foreign foods.

Spanish cured ham producers have participated in the Shanghai Import Expo for two consecutive years, which has helped them expand their sales channels, driven by the strong spending power of the Chinese people and the pursuit of a high-quality and healthy lifestyle.

Cured ham has appeared on the menus of many upscale restaurants and Spanish restaurants in big cities such as Beijing and Shanghai. It can also be seen on the shelves of supermarkets and major e-commerce platforms. I would even say that it is as outstanding as other imported foods such as cheese and wine.